​The Old Town area of Mahkato has been a significant site for Indigenous people throughout human history.  Prior to settlement, the Mahkato area was a regular campsite for the Indigenous Tribes as the connecting of multiple rivers brought the abundant supply of natural foods and medicines available in the area.  Mahkato held cultural significance through the landscape, Mahkato was a place of gathering, processing, celebrating, and spiritual as well.  Many Tribes traveled through the area over the years and laid claim over the area.  In the warmer months, the old town area was a busy place as the area was abundant in freshwater, food, and plant medicines. Tribes often stayed in the area,  while others traveled to the area for ceremonies and food sources.   The mounds at the current Sibley park were a place of ceremony that often occurred in the spring season, while the site of the current old town is where many camped as it was next to the river.

When settlers began to frequent the area Tribes fought hard to keep the area due to its abundant resources.  Treaties, trade, and cash didn't translate well with Tribal leaders, and settlers used this to their advantage while acquiring land and the Mahkato area.  Language barriers were used against the Indigenous people heavily during land grabs and conflict between the two different cultures happened frequently.  Losses on both sides occurred.

In 1824, in order to execute the U.S. government’s Native American policies, Congress formed a new agency within the War Department called the Bureau of Indian Affairs, which worked closely with the U.S. Army to enforce their policies. At times the federal government recognized the Indians as self-governing, distinct political communities with numerous cultural identities.  However, at other times the government attempted to compel the Indigenous Tribes to give up their cultural identity, hand over their land, and assimilate into the American culture.

The area was still officially Indian territory until February 14, 1853, when the ratification of the Treaties of Traverse des Sioux and Mendota ended Indian ownership. The County of Blue Earth was created by a division of Minnesota Territory in March 1853. The County originally contained a huge extent of territory to the west, but this was reduced in 1856 to the present boundaries, containing 764 square miles. The first county officials were appointed by the Governor of the territory, Alexander Ramsey. The first election of county officials took place in October of that year, with a total of 28 ballots being cast.

The ratification of the Treaties of Traverse des Sioux and Mendota land, which had been occupied by Indians was opened to White settlement. The rapid influx of settlers caused friction between the settlers and Indians. Dakota Indians lived on a reservation to the west of present Blue Earth County, and Winnebago Indians lived on a reservation that included eastern portions of Blue Earth County. Tensions between Indians and settlers, limited supplies allocated to Indian agents on the reservation, and other problems led to the Dakota War of 1862. At the conclusion of the war, several hundred Indian prisoners were tried by a five-man military commission; 303 were condemned to death. The death sentences were commuted by Present Lincoln for all but 38. They were executed on December 26, 1862, in Mankato.(https://www.blueearthcountymn.gov/164/History)  In between Reconciliation Park and Old Town, the hanging of the Dakota 38 plus two Lakota's were hung.  Today, we remember history, recognize the good and bad, and honor the truth of history through the celebration of togetherness. 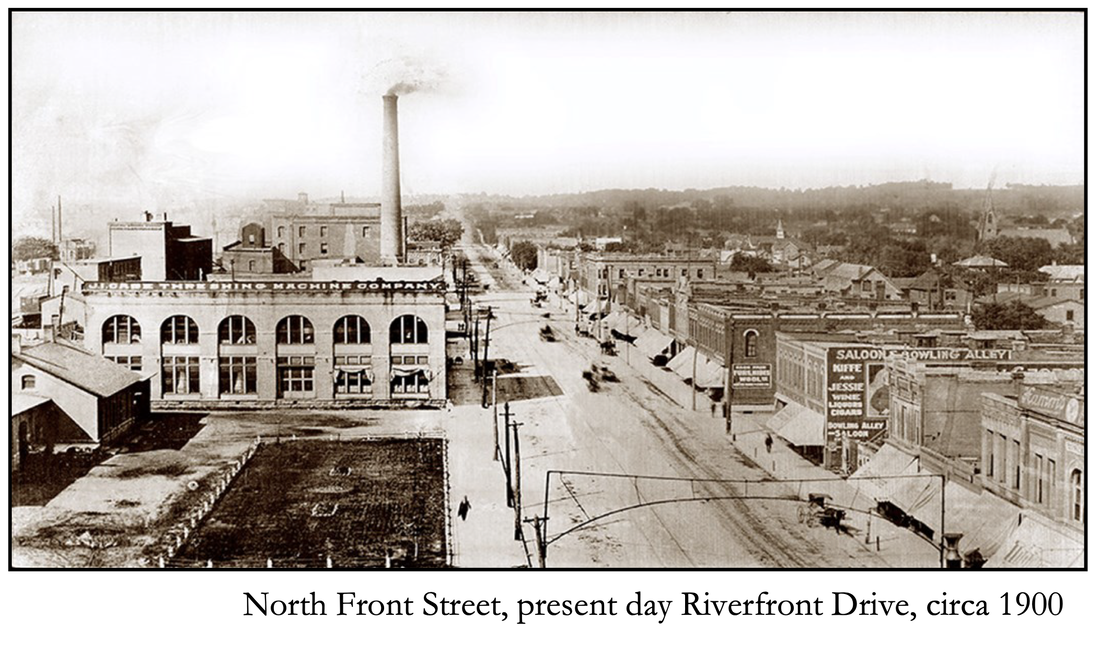 The North Front Street Commercial District was listed on the National Register of Historic Places in 1980. The district is a grouping of late 19th and early 20th century, brick and stone commercial buildings addressed between 301-415 Riverfront Drive (odd numbers only) with its historic significance derived from architecture and commerce. The district is comprised of 17 buildings. Additionally, the Stahl House, 301 N. Riverfront Drive, is designated as a Local Heritage Preservation Landmark.

An extensive history and walking tour can be found below on the Visit Greater Mankato Site.
Download Historic Walking Tour